World Championship series is about to start.

Tournament begins this week. It is free to enter: by just buying the game in Steam is enough.
We want this championship be the first of many. While there are many players playing them we will carry on organizing new tournaments.


Welcome to: The League of the Extraordinary Vortices. 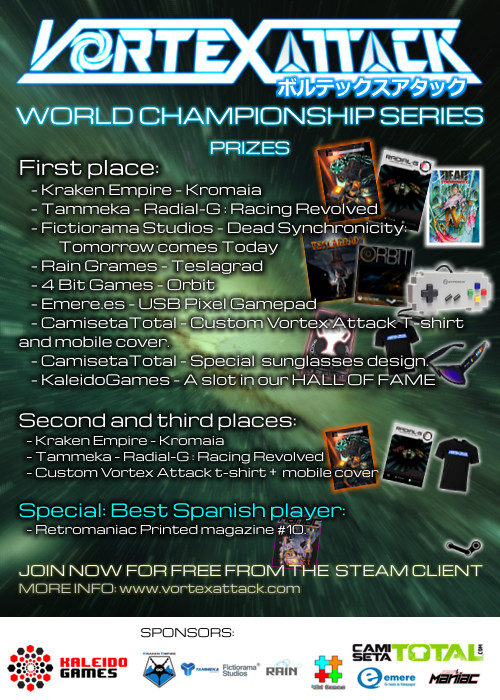 What is Vortex Attack ?

Vortex Attack is an indie Arcade game that can get really frenetic and addictive. The game is based on the addictive old coin-ops that have eaten so many of our quarters. It started small but it has become a full grown arcade game with its own dedicated cabinet. It all feels very retro, but modern. We spent a very long time tweaking everything, and it's a lot of fun now.


Vortex Attack, after all, is more or less a spin-off Galaga™ with a lot of extras that modern technology allows us to implement today:
- Online scoreboards and achievements.
- 11 different types of ships with hundreds of power-up combinations.
- Thousands of sparkly particles in screen: great atmosphere!
- 3 Simultaneous players.
- More bullets-n-explosions than any game from back in the arcade days ever had.
- And more!

You can get it for PC-WINDOWS for only 5 bucks:
Game is for sale (15% off) here:  GREEN MAN GAMING .
You can: DOWNLOAD FROM STEAM.

Since Vortex Attack has been designed specially for beating each-others hi-scores (like the old days). We have gone a step further and we have created the tournaments system where anybody can create a tournament with its own rules. With this, we are organizing now the first Vortex Attack World championship and everybody is invited to join it. Not bad for a one man band, Indie developer, right?

This first series has already 9 sponsors* giving over 19 prizes distributed in 3 winners.
We are extremely grateful to all of them, they are really cool: 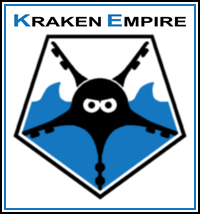 Working on improving their first game Kromaia. When we discovered each other's game we were quite happy to see a 2D/3D abstract shooter. One of their ships is playable in Vortex Attack. 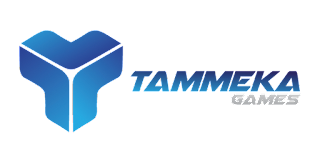 Tammeka is a studio based in Brighton (UK). They are currently developing their first cool title, Radial-G: Racing Revolved. A thrilling racing game that will have you competing on futuristic anti-gravity tracks against 16 other players. Available now with full VR support!

Rain AS is a relatively young company, growing forth from a cooperative community of local artists and programmers. The are helping the championship with their game Teslagrad. 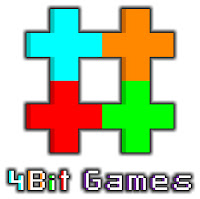 4Bit Games is a small independent developer on the western coast of Norway.They offered some help by giving away a copy of their first local multiplayer steam game (unreleased right now) Orbit.

Online t-shirt's (and other customizables) shop. Happily they have offered to Sponsor the champsionship with sunglasses , mobile phone cover and t-shirt all based in Vortex Attack.

Online videogame related products shop with worldwide delivery. They are offering a cool USB Pixelated Gamepad. We want one too!

Spanish free independent blog & magazine that releases a printed paid copy about every year. They talk about the Retro Scene and with every new edition their Indie Section grows! Totally recommended if you can read Spanish.

They are giving away a printed copy (350 pages) of the latest edition (#10) for the top Spanish player as they only ship to Spain.

Do we have more?

We talking to mayor Indie and Arcade companies to give away big prizes for this or the following contests, if you know anyone that is interested please let us know.

Here it is a compiled simple list for the winners:

The World Championship 2015 series will run from September to December.
Every month there will be a public tournament where players can score points, at the end of every month, table will be cleared and scores will be transferred to another table (check official site) where points will be added as the following.

Score table can be found HERE.

This championship has 4 stages: one per month and ends in December.

Winners, and claiming the award:

Only 3 first best players will get prizes:
When the last stage finishes, after adding the latest points to the League table.
We will proceed with the date verification and cheat checks. If all clear, we will publish the name of the winners in Twitter and winners will have to claim their prizes before the end of January 2016.

Note: Prizes will go down the list if the awards are unclaimed. So try to score as much as possible and never quit.


We hope see as many player as possible , if this proves successful we will aim for bigger contests!
Get the game from STEAM now.
And you, what are you waiting for?
Level is pretty low, take your chance while the game is not that known!