I first want to apologize for writing with my thumbs. After all, I am a developer making games. Writing articles is not my thing, but I feel I had to write this one.


I'm Jaime Dominguez and I lead Kaleidogames and I develop almost every aspect of our games.


Since October 2014, KaleidoGames has taken Vortex Attack to 4 fairs and the result of that was a rushed but effective evolution of the game.


The history goes:
Two weeks before the first fair, I was just being a brand new parent, looking after my son. I was working whenever possible developing this new title I started after finishing Beekyr. When suddenly my phone rang: I was being offered to participate on a stand at "Play4test" for a good price. I immediately said yes... displaying a game in a fair like that was a good thing, and it should increase the visibility of the game and company... I had to do it, no matter what… Vortex Attack was in the middle of refactoring/ debugging/ game design. But again it was worth it, indie careers depend on that kind of thing.


From that day stress raised ~400% and I had to come up with a playable standalone version in 10 days. This meant operating the game correctly without hacks or special buttons. In effect: a playable game demo.
In addition to that, in order to add more stress to my ultra-packed 28 hours days, I had to design posters, instructions screens (and print them) and business cards to send them to printers, pay in advance in the shop, tweak designs a couple of times more and expect good results from that. It was mental. I would say it's not very healthy...


The first fair, Madrid Games Week (Oct 2014), arrives:
Initially we had really poor hardware, faulty tablets that burned after being plugged a few hours. The tablets were new and didn't have any software installed. Bluetooth and USB didn't work, only WIFI.... with tethering from one of our mobile phones. So we had to connect to the cloud (using 3G) to download the builds I luckily uploaded to my personal space on the previous night.

We also had access to PCs but they were only good enough to play video, not video games. Luckily it was a day for press and professionals so the stand was not packed with people. I had a chance to experiment and swap hardware till I found a decent computer. I ended up using a PC that I found in a pile of broken computers. They broke after suffering many power cuts for a few hours, and Windows had enough of that and BOD was its new 'OS'. ... It was a difficult day fighting with hardware and the stand capabilities.


That night, at home, I was able to fix some bugs we found during the fair, and also optimized the game by reducing the level of detail. After all, not everybody has a gaming PC or tablet newer than 4 years.
The second day all went a lot better, game was playable only on PC, the tablets didn't really work. I had a stable playable version of the game on display and I was happy to see it played by strange people. It was the first public version and there was a lot of work to do: people struggled, they didn't know what to do. Vortex Attack is a shooter with a twist and not everybody got it. I had to tell them what to do (despite having a printed poster with instructions) almost every single time someone played.
During the following days I met new people with suggestions and comments about the game, I was able to make notes of all of them and consider what was worth working on after the fair.


That fair ended up alright. It was Vortex Attack's first fair and it survived.


In 2 Weeks there was the second fair: XX Salon Manga Barcelona (Oct 2014):
I worked on the menus and the gameplay instructions. Now, the game could operate without me.
I wasn't able to assist but apparently people played all day long. They enjoyed the game but it was maybe a little too easy. There was a bug that didn't make the game much more difficult, as a result of that there was this kid playing without rest for almost 2 hours. 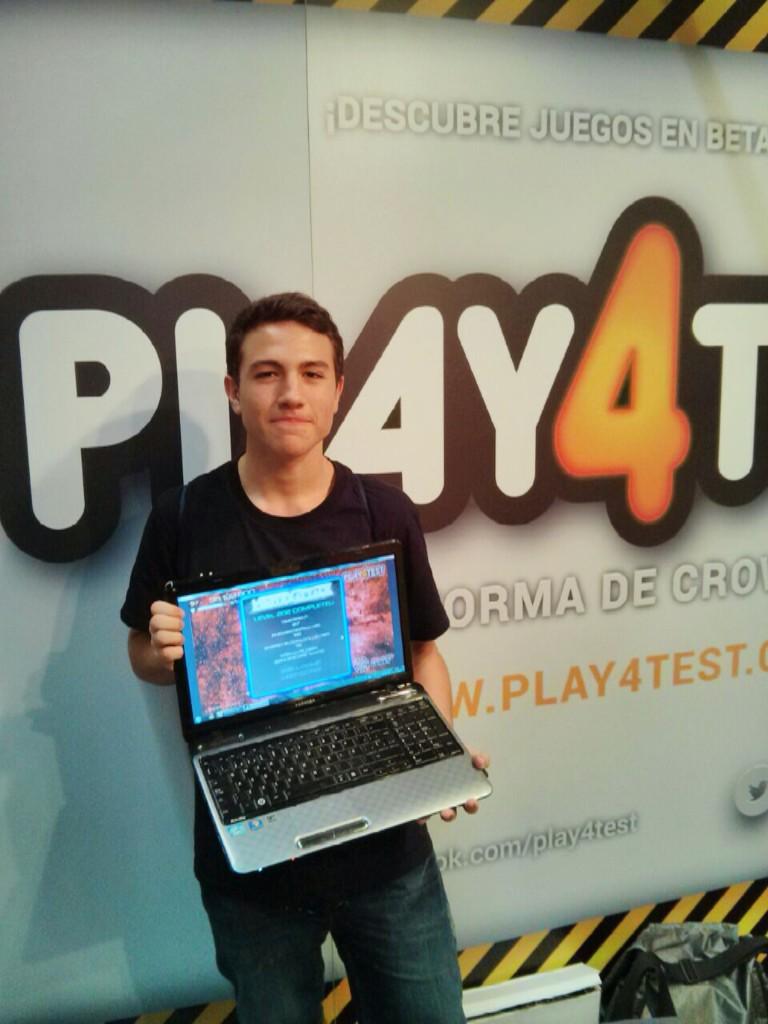 
After that fair, I had a month to fix and improve.


I made the game a bit harder, also polished some bits and implemented the multiplayer mode. Which makes the game a lot more playable. Sharing a cool game with hundreds of explosions per minute with a friend in the same room is amazing.

The third fair: ParlaBytes (Nov 2014):
People reacted better to the game. Kids didn't see any 3D war machines in the game and weren't tempted to play, but after I invited them, they played and got completely addicted. After that it went smoothly, there were massive queues to play the game, Beekyr with OUYA was also pretty busy. I felt like a drug dealer next day when they were waiting at the door at opening time to run to my area to play more. I never thought I would have to invite them to stop playing every now and then*, as they were hogging the opportunities for new players. For me it was really great to see that attitude, I have no words to say how amazing I felt, it was like a dream come true: Making fun games where kids (and adults) want to keep playing!


Almost everybody asked when the game was going to be out for PC or Android. I kept saying it was still a long way to go but they insisted the game was just fine as it was. Not sure if they were excited with the rest of things in the fair, the contest or they were being rational.

Here are the videos of those people:


I decided to improve the Arcade mode (which is what they were playing). As they preferred playing multiplayer I had to improve it. I ended up adding some specific elements to improve local competition. After all, I make games for friendly competitions, I just love them. I also raised the difficulty level and added a very short playable tutorial.


From that moment, the game production took an unexpected turn. The arcade mode no longer was supposed to be a secondary thing and I focused on that mode, the rest (like the campaign and shop) would come later.


The fourth fair, RetroSevilla, (Dic 2014) arrived:
Vortex Attack had another set of very different people hooked into the game. People enjoyed the game a bit more.
Here are a couple of videos with a bit of gameplay:


I had enough to go on, the game was pretty good and it was still lacking all final bosses. I have to make them along with other enhancements (more enemy types, better in game menus, leaderboards and stats system) This means some more work on the game.


Is this needed? Not really, not for a quick casual game. But I'm trying to make a game that can last for a long time, not just a simple game that ends up forgotten after being played a couple of times. I am not making games to get paid by customers, I'm trying to have a legion of happy players!


The fairs were finished and I was able to reduce the work intensity. I started aiming to release first public version to show in GreenLight on February or March, and work more relaxed. But that mission didn't last long, a week later I had a revealing conversation with @ludipe (from Missing Translation). He told me that just had his game greenlit in a week. Then he showed me a graphic where the votes went right up after putting the game in a bundle. So in a way, the earlier I place the game in Greenlight, the better, I would have more chances to get selected by a bundle or press looking at my game. It's the only way.

First I had to record, edit and upload a good video teaser. I needed to work all day on that, no distractions. I was on the computer all day alone (about 14-16 hours) and I managed to make a attractive video in order to display what the game was all about. Screenshots are nice but a video has movement and music.

With this video, I felt confident creating the Greenlight page...


Let me show you what happened when I placed my game:

First days, It had pretty good feedback 45% - 65%. It was all joy with about 800 votes in 4 days. Suddenly after that, the feedback and the votes, basically went away. That Greenlight page had no more activity, it was kaput... What, why, how? There wasn't much to do but write a Vortex Attack PressKit and send thousands of emails to the press. So I had to do it, but again while I was preparing it something unexpected happened: I got an email from someone from Groupees.com. They saw a post in a forum in indieDB. They wanted to place Vortex in a bundle, perfect! That was the perfect way to get visibility. Not sure how this is going to work but it's worth a try. Specially after that chat with Ludipe.

Stress raised again! I had to place a version in Desura. I rushed to prepare it and upload it that night, I had 6 days left. I had to prepare all the images, texts, prices, luckily I had an almost prepared pressKit. I used that info.

I had to create a version that is like a Demo but with more features. These days are called "Early Access". This means I can publish my game as Alpha and people can pay for it. In a way is like crowdfunding but perhaps more reliable: the game is already there and it just needs a good update.

So after the upload and pressing the "publish" button I had wait for desura to allow my game to be published. It wasn't happening for a few days, oh dear, the bundle was soon and it needed that Desura version. I contacted them personally and pushed the process a little bit. I didn't expect it to take over 5 days, but apparently now they are testing the games differently and they are not allowing badly developed games. They luckyly answered my email, published the game and told me that now games can take up to 3 weeks to be published.


And here you can get Vortex Attack from Desura:

I am not seeking to sell my game in the bundle but visibility to sell it later as normal game. After all we hardly make much money from bundles (unless tens of thousands are sold)


Meanwhile, I'll keep on working on the game knowing that a few more thousand people will know about it. This is similar togoing to fairs, where visibilty is key.  If the game isn't choosen for Greenlight soon I will just finish it anyway and sell it in Desura, which can be a good system, but sales are low... This might change eventually.

I can all relax now... Or not? Well no, not really. This never ends.

Please, consider voting for our games, they are the result of hard work!