Porting the Beekyr (game) to OUYA had to go through some steps. It took us just a few days . 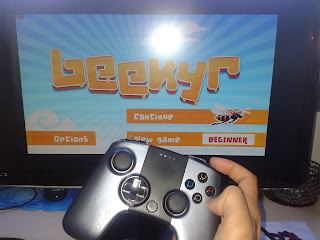 Bureaucracy:
We had to make our account, and register payments information and legal tax documents:

We took a long time: Because we had to download, print, fill, sign, scan, convert to PDF and send some Tax form for the US gobernment.

After that , the technical part started:


Controller:
We had to make the game work with the controllers. It took a while as buttons were not being recognized. Plus we had some code that making the controllers go funny. Then since OUYA has a game pad that is basically a keyboard and mouse it didn't really recognize it as a controller. Well that what I thought. Then turned out that it was really recognized in the first frame of the game but the garbage collector was erasing it straight after, so we had to initialize it all then. It finally worked.
We optimized it so much that XBOX 360 controller also works (works better than the native OUYA controller!).


When it worked, I had to make sure the game worked smooth... It wasn't the case. The base code had to be slightly edited to reduce the screensize. We are forced to use 1080p so that is a big area to fill for a mobile GPU. It worked but it was slwowing down at times makign the game not fun.
I had to limit the screen size to a smaller area, to at least keep the game running at constant 30 FPS.

Ideally we will love to make the game run at 60FPS like the PC version. But maybe OUYA is not powerul enough?

OUYA specific details:
The guidelines say that we need to be explicit about things: I.E If a menu requires touch pad we need to tell the users. So we had to add some messages to tell them.

We also had to improve some misleading messages. Like Game has 23 stages but when you finish the game it says 24 stages completed.

Scrollable menus that in Android you only need to drag down with a finger. In OUYA is not so clear and they need to be explicitly told there are more items with a permanent scrollbar for example.

OUYA at the moment doesn't have GooglePlay so we can't really use GoogleGames services ,it's a shame because the Hi-scores system is a very cool thing to have (like we have in the GooglePlay version)

Thins like that made the game a little bit more polished thanks to the OUYA testers. At start it seems to be annoying but really it's better as it only improves the game. 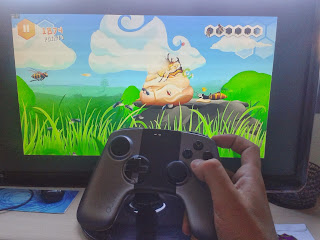 
Best thing you can do is:
Download your copy now!

We are very proud to be a real arcade game for Android!


We just enabled a beta for the paid version of the game. It will submit the scores in each difficulty level and it total bugs killed. 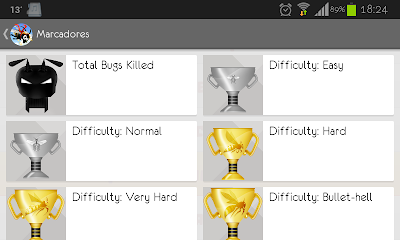 In a couple of days this feature will be enabled.
We are just giving some advantage to out beta testers :)

Get your copy here:

Now Beekyr has a local hi-score value. Everytime you beat it, it will send the score to the servers to be registered worldwide.

There will be a Hi-Scores ranking per each game mode.... If you want to score more, try to get the secret levels and its bonus stage!

We have been contacted by 100% Indie offered to appear in Samsung Apps. We hope we get more attention than in GooglePlay.

Also we have been offered to appear in a new bundle called: IKOID, it might be awesome to get it there...

With places want the game we should de making millions soon... But it's not as easy...this is a very tough saturated world and we need to work really hard to get enough money and live from it...  Hopefully it will happen eventually!

We have decided to add a new cool feature:

We made a little experiment and it displays like this: 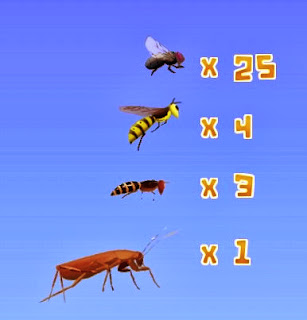 Then we will reward the player depending on how well you do.

Then there will be a stats page where you can see all your rewards and killed monsters.
How cool is that!

Get your game now and you will get this update whenever we put it live!

Today we will be presenting the game in :
http://www.meetup.com/Amigos-del-Videojuego-por-Madrid

Feel free to come and check out our Elevator Pitch. We hope that everyone likes it and more people get to enjoy our game even more!

Get it now here:
https://play.google.com/store/apps/details?id=air.kaleidogames.Beekyr
Posted by Unknown at 18:41 No comments:

Hello guys, this is a crazy test we made for performance... It is pretty cool to see so many bullets in screen running so smoothly.


Don't be scared... This was only a test, there is no level this hard, not even in its 6th difficulty level.
Posted by Unknown at 18:31 No comments:

Our first game is out: Beekyr

We Kaleidogames are new but we want to make good quality games, that's why we made: Beekyr.

Beekyr took us 8 months of very hard work. In fact, we took about 4 months to build the game and the engine. The other 4 months were used in polishing the game. We are all very happy...

Beekyr is a shoot'em up game with no cinematics or a complex story. Just well polished gameplay and addictive levels.  You don't need more than 1 finger in touchscreens or 2 buttons (in gamepads).

We really hope you like it, if you get it now, you will the next future features for FREE using updates:

Hello, we are Kaleidogames, indie developers:

We are indie so we have low budget. We don't have crazy pre-rendered cinematics, crazy marketing and amazingly detailed backgrounds. But we have what it matters, well good ideas, and we execute them as much as possible. We'll work as much as needed to make awesome games.