This post was created to help everyone that is about to release a new game in Steam that has never done it before. Also, even though post this is based entirely on my experience with Steam, your experience might vary.

Even thought this post doesn't really talk about development itself I can assure you that it was a very intense experience.. I had to build the whole engine, deal with thousands of bugs, gameplay balances and such. All in total almost 12.500 compilations in 16 months, you can do the math. My obsession for perfecting gameplay gave me thousands of attempts to see if the game was more playable after every update.

This post was so long that I decided to split it in two parts, so I could talk about more interesting stuff in each part. Here it goes first part:

Our first one, Beekyr in 2013, was a pretty hardcore (but a lot of fun) game, adapted for Android with touch screens & gamepads, iOS, OUYA and finally for PC. Also, there is web (flash, lo-res) version I have uploaded here. It had several thousands of downloads but hardly any sales.
The game didn't sell much due its strong theme dissonance; a hardcore game with kid's orientated insect graphics. That attracted the wrong people and repelled our target players: shmup experts. I went through this behaviour in a previous blog post called:  Disappointing stats about Beekyr.

This time we were going to avoid the problems with the theme and target competitive players. It would be based in scoring as much as possible instead of advancing through scenarios. This one would be more like old space shooter games like good old Galaga, Space invaders, etc. Its name was Vortex Attack.

This document will show you all the mistakes I made during its publishing but also also its evolution.
How the game evolved from this in September 2014: 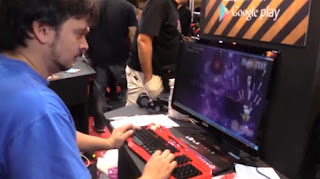 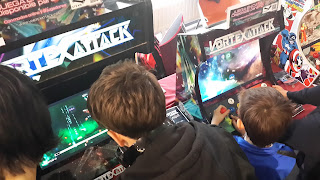 Two dedicated machines for fairs and one of them resident in an active arcade venue.

After 1.5 months development, I took it to a fair in Spain (Madrid Games Week 2014)  People liked it I even had someone asking me to put it on Steam. I felt joy but the game wasn't ready. A couple of months later I took it to two more fairs and more people mentioned Steam again. This time they were more pushy, they wanted to play at home.... I also had some kids playing non-stop in one of the fairs (Parlabytes 2014); they were totally hooked by the game. They literally told me, with red eyes, that they had never played a game for so long non-stop, they loved the game.

To be honest, I felt like a drug dealer, and they wanted to have my game, their dope. I have never experienced that kind of situation from this side but it was quite interesting. When I was a teenager I did the same with Starcraft and Heroes of Might and Magic 3, they were my dope back then.

So I felt the game was already advanced enough and I decided to have a go to Greenlight.

I started preparing the marketing assets: 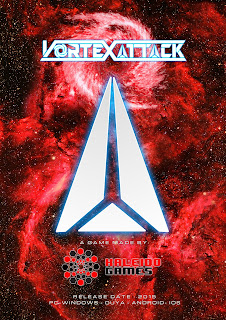 Back then, that was all I had to show. So I felt that it was an amazing way to show my game. I had the impression my game was really good!

Yep, that was me losing the objective vision of the game! I had been working 10h a day on average for 4 months to get like this. NOT RECOMMENDED
By the way, have you ever wondered why really shitty games with shitty graphics & shitty gameplay get ever released? This is probably the reason.

Also, the addicted players that already played, had no barriers to get into the game. They just had to sit and play with a gigantic x-arcade controller. I have to admit they were a bit reluctant to play it at first: not very attracted to the game at first glance but once they played for a couple of minutes, they didn't want to stop playing. The rest of visitors & players gave good feedback:
This meant something that I didn't figured out until it was a bit late: They were biased after playing the game and talking to me.

POST MORTEM ADVICE HERE:
Our mistake: Thinking that people online would react as positive as people that have played the game already.

Result: I wasn't going to be there with the user viewing the game online, so their opinion would be entirely based in the assets I was going to upload. Players had an early opinion of the game and obviously, they thought the game would end up very similar to that.

How to do it correctly: Ask real (not virtual / online) people to give you feedback on the material that you are going to display online. Don't let them play your game or hear any comments from you or anyone. That feedback will be priceless. But we warned: be ready to be hit with a brick right in your nose, specially if you push them to be 100% honest with it.


Placing the game in GreenLight.

I finally went ahead, paid the fee Greenlight new account (£70/ 100US$), created a new Steam account and placed Vortex Attack in Greenlight. For the first 2-3 days Vortex Attack got about 800 positive votes. It's quite good for a game that hasn't been in the media, just in fairs.


HOW DOES STEAM'S GREENLIGHT WORK?

Steam needs enough of those positive votes to put someone from Valve interest in the game. This is not mathematical, the Greenlight system is just a pure reference for them to consider games entering their market or not. But don't worry, these days, the filter is pretty easy to pass. Back in 2014 some good games could take 6-12 months to get in, my game wasn't that impressive and took a lot less time.


After that, Vortex Attack was moved away from the main page as new titles were in, and most of all visibility went away and votes immediately just stopped growing. From that moment it depended how well I told the people about that Greenlight's page in forums, Tweeter, Facebook and email.

Luckily for me, a few days after there was someone, Alie from Groupees, (A site about bundles ) telling me that placing my game in his bundle would help it to get extra visibility. Before of that, I had to upload my game to the Desura (indie portal) in order to be able to sell my game in his bundle. So, I talked to a friend that did the same (@ludipe with Missing Translation) and I finally took the risk: We placed Vortex Attack in the bundle: "BAGB18". I just had to wait a month for the bundle to become active but it was great. We sold almost 4000 units; from that about 25% of the people took time to vote the game in Greenlight.

Note: the alpha of the game was downloadable from Desure and when the game made to Steam I would have to give all supporters a Steam Key

At first, I thought it was pretty good as it ended up increasing my visibility permanently. I didn't have to nag people anymore, I could focus back in the game development. And after a few weeks it happened suddenly: Vortex Attack was greenlighted after 2 months.

Here is how it went (it's the green line): 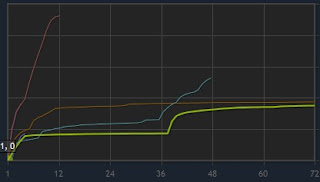 You can clearly see the first few days, then nothing happens till the bundle becomes active.

There is another interesting post where I explained other details about the process until here.
Check it out here: How did we get Vortex Attack rushed into an Early Access version

THOUGHTS AFTER BEING FEATURED IN A BUNDLE LIKE THIS:
Later, I would realize many of those keys were actually being traded (even sold) in some websites. I suspected sales would not rise much for a while until those people run out of steam Keys. It's silly but there is speculation even for a 5USD game. To avoid this kind of thing Steam should let us set an expiry date for the keys. People that get them shouldn't be able to trade them, it 's not fair for small indie studios with very low prices.

Anyway, I was working on the game adding levels and better AI systems, and still adding playable ships. But with the possibility of adding my first game to Steam I felt the urge to release the game ASAP, there were very exciting times.

I thought I could get the rest of the game done in about 2 months, after all it had already most of the features and I only wanted to release something playable ASAP.

In order to add the game to Steam, I had to do a lot of work for the market place, this meant time not progressing with the game.

Note: To publish a game in Steam you have to do all of these tasks, I didn't know back then but I should have allowed more time to prepare all of this, it was a very stressful time to get all of this done as well as the game...

1 - I prepared the Steam page with all the game information:
2 - I learned how to implement Steam features which by the way aren't necessary for publishing in Steam, but they can add a lot of value to the game.

3 - I had to learn how the builds system worked and how to upload and publish the game, which took me little time. I have to admit once I created a bat file it's possibly the fastest publishing system out there.

... but also I had to prepare more things to get noticed by the press.


4 - Created a new page for Vortex Attack at www.kaleidogames.com

POST MORTEM ADVICE HERE:
Some developers stop here and that's wrong! If you don't tell the world you have made something amazing they will never notice. This is as important as development. Trust me! The game won't magically spread though the web, I have gone through that already , and I can tell you, it doesn't happen that way. Unless your game is featured in a shop or something like that, but chances are way to low to take that risk.


5 - Prepared a press kit to send to the videogames media. I used this: doPressKit().

6 - Go site by site gathering contacts information to who I should send the press kit. This is an ongoing database, you should start this ASAP, it takes ages! But, to be honest I would not do this step If I had more economic resources. If you do have a little bit of money  you should not get involved in this kind of thing, and should pay someone that can do this for you and send the press kit for you, they probably have a data-base already. You would still have to write it but finding contacts is possibly the most tedious task of all of them.

To accomplish all of this took about 3-4 extra weeks of intensive work. So I had to I delay the release date a whole month from its initial release date.

But I thought I could show the game as beta before of release date and I ended up uploading it as 'Early access'. This happened before creating the web and sending the press kit ... I thought nobody would notice and Steam wouldn't make a fuss about it. I really thought it would be quiet and perfect for testing the game but...

Sorry, You have reached the end of the first part.

If you liked it first part please read the second part of this post mortem here There are lots of post-mortem tips, interesting stats from Steam, press and sales.